TH15 When and What Can We Expect? by Mackenzro Gaming 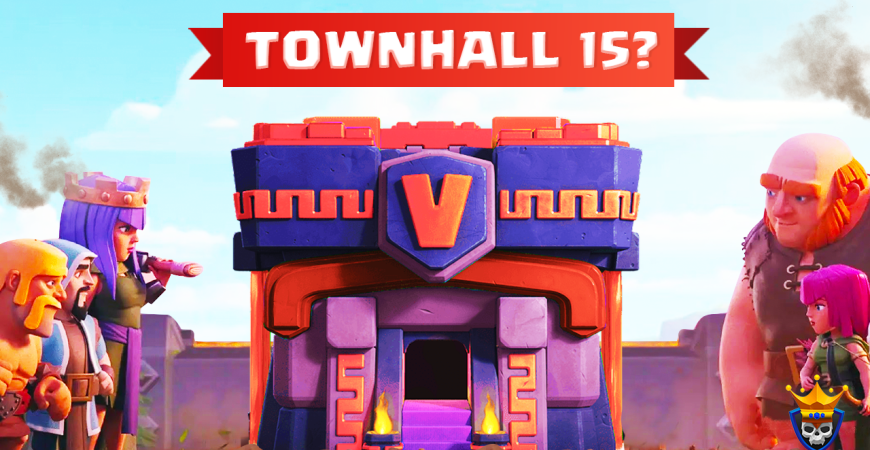 We all know Town Hall 15 is coming to Clash of Clans soon, but when do we think it will drop and what do we expect it to have? I’ve studied the history of Clash of Clans updates and poured over hours and hours of interviews that Community Manager Darian has given publicly, in my own video’s and in other videos about the update.

Pretty soon… want me to be more specific? Ok. When The Clash World Championships was brought forward from the traditional date of December to September it was clear to many that this was to accommodate an update by the end of 2022. Darian has spoken of a rough timeline of 18 months for each townhall level and while this isn’t an exact number the 2 factors pointed towards either a Fall or December update. There are traditionally 4 bigger updates each year, Spring, Summer, Fall (Halloween) and December.

It would be strange for an update to land in November or January. Th13 Arrived in December but with the arrival of Hammer Jam straight after the Worlds it would be a pretty safe bet to assume that an update might drop around the week that Hammer Jam runs out. Hammer Jam will run to October 10th so this week or the week after would be where I would put my money if I were a betting man. Also, updates are normally on a Monday or a Tuesday, this gives the team in Helsinki time to fix any bugs that are found on release. Updates are normally trailed by a “Developer Update” video and then a series of blog “sneak peeks” where we are drip fed information about the key features of the new Town Hall Level.

What Can we expect?

From Th9 each Th has had a new color, we have had black, white and all of the primary colors. With th14 we started to delve into secondary colors with a green vibe, so it may be a safe bet to expect orange or purple  as colors for TH15. Darian has also previously stated that they want the color to pop from the background so there are other options available such as neon yellow or hot pink! With TH14 they introduced a “theme” (jungle) so whatever the color there may also be a theme to accompany it. Honestly I have no clue where they could go with a theme but Darian has ruled out the Avengers as a theme! Personally I would love to see an orange town hall, but that might be to do with my other obsession in life!

In short yes, we can expect a new defense, from th9 each town hall level has been accompanied by a new signature defense, and from th12 we were introduced to a town hall defense. It’s fair to assume we will get one of these or possibly both. The Clash of Clans team is not in the habit of adding new things unless it adds value or a new mechanic. So any new defense will have a totally new behavior from previous defenses.

The townhall defense does tend to be an already established defense stuck on top of the townhall. We’ve heard lots of talk about another eagle on the townhall but something VERY similar to that has just been used on the Capital Hall. I wouldn’t be surprised if we stuck with the inferno beams but a mix of spells were released when the townhall was destroyed. Could you imagine how devastating a combo of poison spell and skeleton spell could be.

This is a good point to talk about space in the village map. Now, we have a bit of a problem with space in the village, there are almost 100 buildings and this leads to issues with calculating % destruction. While this isn’t a major problem (a building could be worth less than a % when destroyed) it does make it tricky if the math doesn’t work out exactly evenly. It would be really difficult in the world of esports if each building was worth a different %. There are some solutions to this. Darian has talked about merging defenses to make super defenses previously, although this was very much at a blue sky thinking stage and there is nothing to suggest this is something they are introducing for Town Hall 15.

Trash buildings (or non- defensive buildings) are also taking up space where defenses could be added, they have just freed up 4 buildings by announcing that they will reduce the number of Barracks and Dark Barracks down to 1 of each. Battle Builders was a nice concept that they explored at th14 and it went down well (if a little weak at first). Adding defenses to Barracks, Army Camps, Spell Factories or Resource Buildings could be a fun extension of this concept and something I think will be brought in during the next update. However, as I mentioned before, Supercell like to add new mechanics when they introduce things; the battle builders did this, they fought back and helped to rebuild the surrounding buildings. So expect something more inventive than the villager manning an xbow on top of a Dark Barracks.

From a Base Building point of view you would initially expect more defenses to make the game harder, and while it’s true that there will be more Damage Per Second (DPS) thrown at the attacking troops there is a danger that it makes the game easier. Bradders, Pro Base Builder for Clash Champs, took some time to explain how trash (non defensive) buildings are used in defense.

“Trash is used to control or disrupt the pathing of defense targeting troops, this forces them towards traps, splash damage or away from a key area the builder is trying to defend. If there are only defensive buildings on a base then this is impossible to do and it encourages Spam or mass troop attacks.”
New Hero – Since Townhall 7 every odd Townhall level has added a new hero to the game. So I thought a new hero at th15 was a certainty until I had Darian on my stream who said, “We’re not sure 5 hero’s would be an enjoyable experience for the player and while exploring this concept we started to ask do we need a new hero? Is there a niche that needs to be filled”

Now Darian is the master of smoke and mirrors and as such he could be throwing us off OR they could have recognized that hero’s are already SOOOO strong adding another one, and probably a new pet could cause major problems. More likely is a new pet which would change up the meta and add a new element to the game where you have to pick which pet is removed from the roster.

Troop Levels – Witches are a hot favorite for a new level, they haven’t had an update since Town Hall 12, which is crazy considering Super witches are still viable at Town Hall 14! Expect a smattering of upgrades to the majority of troops and defenses as well.

A new troop? Maybe, A new super troop? Almost definitely! I’d love to see a Super Hog or some variations to existing super troops. When Super Troops were first introduced this was mentioned as a possibility but we have never seen it brought into the game. A new siege machine is a possibility but this is probably the least likely to happen. We just got a new Siege Machine, The Flame Flinger in December 2021 and to introduce another so soon would be surprising.

What about Clan Capital and Builders Base? Builders Base Rework has been scheduled for 2023 and the Clash of Clans team has already said that they don’t plan to introduce any new content for Builder Base until then. With Clan Capital it wouldn’t  surprise me if they introduced a new District to us in the next update but it also would be understandable if they concentrated solely on Townhall 15 in the next update. And then there’s this thing that they trailed on the pre-worlds stream. I have NO IDEA what this is or where it fits in. The size and feel of it gives me a Clan Capital vibe, but the fact that it has different upgrade branches and that it says  “not counted in VILLAGE strength” throws some interesting questions up. Honestly I could write another blog just on this picture. It has a passive impact on the home village, there are no storages in Clan Capital, but it stays in Clan Capital, 6×6 is a HUGE amount of space.

Does this give us an indication of a theme for Townhall 15?

For me speculation is one of the most enjoyable parts of the update cycle, what do you think? Is it a couple of weeks away? Will there be a new hero? Will I get my way and have an Orange Townhall 15? Let me know if you think I’m right! And by the end of the year we can look back at this article and see how much I was right about and how much I was wrong!